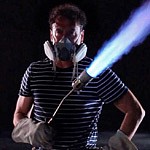 paul rousso from ThunderColor on Vimeo.

The ink and paper era is drawing to a close. “All this stuff,” as artist Paul Rousso puts it, “is going away.” That “stuff” is no less than the paper-based underpinnings of modern civilization. Texts, images, sheet music, currency – the paper document is being displaced by its transformation into so many bits of binary code, digitized for the screen and everyplace at once. Yet paper documents are themselves an expression of something else entirely. An artist sketches a two dimensional impression of a flower; a novelist commits an imagined conversation to paper – meaning is imbued within a separate medium, altered yet understood.

From his “painting with paper” collages to his latest creations of wildly outsized and convoluted sculptures of money and candy wrappers, Paul Rousso has sought to flatten the dimensional and elevate the flattened: “There are many shades from one end of the spectrum to the other, but everything has an opposite. My work is about finding what comes next.” For Rousso, a good deal of what’s next involves a process of crumpling, folding, tearing, gluing, and re-composing – turning the printed pages of a single Vogue magazine into a sculpted wall hanging, for example, or transforming every printed note of every Beatles’ song into a massive jumble of texture on canvas.

With influences ranging from Dr. Seuss to Roy Lichtenstein, Rousso casts his pop art sensibilities on a 21st century scale. Advances in technology have enabled him to delve into the heat-tempered sculpting of the world’s ephemera in surprising ways. Through exaggerations of size, Rousso places such familiar items as a crumpled-up ten-dollar bill or a bubble gum wrapper on the same relative plane as the viewer. Intricately detailed renderings at such outsized dimensions as four to five feet in size force the viewer into the role of studied observer. It is in this way that Rousso’s art speaks to the conversion of physical objects and the effect of that transformation on the viewer. Again, “all this stuff is going away,” and Rousso wants you take a good long look.

A native of Charlotte, North Carolina, Paul Rousso attended the Cleveland Institute of Art in Ohio before being sidelined by a too-close encounter with a power saw. Rousso’s period of convalescence turned into a months-long stint in New York City, where he found work as a member of an interior design team drawing plans for the home of Robert De Niro. After completing his B.F.A. in 1981 at California College of the Arts in Oakland, California, Rousso was hired by Warner Brothers as a scenic painter for films. He went on to serve as an art director and illustrator for Revlon, Clairol, Condé Nast, and Bloomingdale’s before becoming a fulltime artist. For more than 25 years, Paul Rousso’s work has been regularly exhibited in galleries and museums throughout the United States.