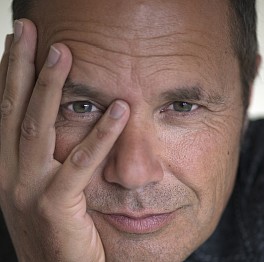 ABOUT
Pascal Pierme was born and raised in France. He emigrated to the US in 1997 and settled in Santa Fe, New Mexico. Prior to coming to the US, he earned a reputation in Europe as a promising young sculptor. Pierme had several solo exhibitions in France and Switzerland, and worked on collaborative projects alongside creative luminaries such as Pierre Cardin.

Pierme cites his grandfather as an early inspiration. He was constantly in his garage creating; he was an exceptional craftsman and painter. In Pierme’s earliest memories, he was fascinated by what his grandfather could do with a simple piece of wood, completely transforming it in a matter of a few days. Pierme recalls. “The scent of his studio was also a big attraction. The fragrance of multiple woods combined with turpentine and linseed oil created a magical space.”

Pierme considered being a foreigner an advantage for his creative process. He quickly discovered a different system, culture and new approaches – opening a new chapter in the young sculptor’s life. Now, nearly a quarter-century later, his career has blossomed in America. Accolades have been swift and abundant. Through apparent maturity in his work, he has been able to take more risks and evolve rapidly. Critics, curators, collectors and artists alike revere his ongoing bodies of work.

In addition, Pierme has found charitable endeavors an important facet in his artistic career. With a heartfelt desire to give back, he has worked as an organizer and benefactor for several organizations relating to the promotion of the arts and the betterment of the community that he calls home. As a resident of Santa Fe, Pierme has contributed to: The Santa Fe Artist’s Emergency Medical Fund, National Dance Institute, Art in Schools, Taos Museum of Art, The Horse Power Project and Aid and Comfort, among many others.

Francois Mitterrand said, “I love the person who is searching, yet I am afraid of the one who thinks he has found the answer.” In my life I have much more pleasure with the questions than with finding the answers, except when the answer is a new question. And that is where the obsession to create begins.

...For decades, balance, movement, inquiry, architecture and nature have been reoccurring themes in my work. I am interested in assimilating what is not supposed to fit – the combining of contrasting elements. My main ingredient is chemistry. I feel the movement and then freeze that moment in the interaction and take a “snapshot” – capturing a split second in the evolution. Thereby creating something that is abstract and at the same time, quite figurative. As such, my work can be experienced as organic. It moves. It is alive, it comes from somewhere, it is going somewhere, and you feel that by what you see.

I try to sculpt in a way where I can change my mind until the last minute. My creativity is at its best when I push the medium of my work to its limit.