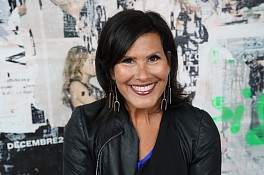 Jane Maxwell is a mixed media artist from Boston, Massachusetts. Her work is exhibited at major galleries throughout the United States and acquired by collectors from around the world.

Maxwell’s artistic voice grew out of a passion for vintage materials, modern fashion and design – mingled with a deep fascination for pop culture and female icons.

Maxwell’s work has been featured in numerous newspaper and magazine articles and in several books on mixed media and collage. She has been a college guest lecturer on the topic of body image and art. Recently, Jane was selected to be included in the 30th anniversary edition of “Who’s Who in American Art.”

Maxwell graduated with a BA in Literature from Middlebury College. She studied mixed media at the School of the Museum of Fine Arts in Boston and at the Decordova Museum School in Lincoln, Massachusetts.

THEN + NOW is Jane Maxwell’s exploration of a major life transition.  Her new solo show was created over the past year and a half as a way to process, grieve, accept and ultimately grow, from the end of a thirty-year marriage.  The work reflects her fragility and strength during this difficult time, while embracing a reverence and tenderness for the past.

For more than twenty years, Jane Maxwell’s artistic practice was driven by an examination of personal issues related to the pressures of society’s feminine ideals.  In her early years, Maxwell used vintage crate labels and movie posters to deconstruct silhouettes, to comment on the deluge of body image messaging.  In recent years, Maxwell has layered peeling billboard papers from Paris and Los Angeles to create silhouettes of women in moments of confidence, power and, just as importantly, in repose.  Worldwide art collectors have expressed profound connections with these strong images of women in scenes of domestic and urban living.

With this new exhibition, Maxwell takes a deeper dive into her own psyche by mining a personal and vast trove of ephemera she has accumulated and stored for decades; from vintage dolls, ledger books, old boxes, three-dimensional letters and numbers to unique antique objects that have caught her eye over the years.  Sorting and integrating these collectibles has allowed Maxwell to create a body of work that represents both the unraveling and rebuilding of a life.

“The last few years have been enormously complex for me. I feel so grateful that I was able to use my art to process the profound changes in my life.  After my separation, I went to the studio and found myself gravitating to bins of old materials I had been holding onto for years. I had a deep instinct to bury my hands in their history - to tear, layer, bind and tuck them into original forms. In a sense, I literally and figuratively let go of the old to create something entirely new. This process and series became my personal blueprint for healing.”

Maxwell also uses this latest body of work to step outside her signature medium of resined collage on panel.  While several of the pieces utilize her traditional materiality, the bulk of the show is a more raw and dimensional exploration.  With this approach, she was free to layer more deeply, thus allowing objects to jut off the canvas and punctuate the intensity of that time period.  In addition, Maxwell added the use of paper scrolls, described as ‘torah-like,’  in an effort to honor the sacredness of her past.  Finally, plexiglass boxes are used to represent the visualization technique that she and her therapist utilize as a way of isolating and processing difficult feelings.

“A year and a half ago, I began working with these materials randomly and the tears flowed. It was a personal journey, unintended for public consumption. As I continued the work, I found that it evolved into a narrative about the friends and family who held me up, the capacity for new love, and a reclaimed strength.  With this healing and tentative confidence,  I step cautiously into the gallery domain to share this deeply personal work.”

I have loved fashion since I was a little girl. Some of my earliest memories are of visiting my grandfather’s garment factory in South Boston. He manufactured women’s clothing and I marveled at the huge bolts of fabric, the meticulous pattern makers and industrial stitching machines. His designer was a woman in her 20’s whom I simply worshipped. My grandfather would have his team create miniature versions of their designs for my sister and me, until we were old enough to go ‘shopping’ right off the revolving racks in his facility.

Into my adulthood, my love for fashion grew, but I went through a period of deeply resenting the fashion industry for teasing me with clothes that I could neither fit into nor afford. In fact, much of my art over the past 20 years has commented on my complicated relationship with fashion and its direct influence on the cultural epidemic of negative body image. As I’ve aged, I still can’t fit into most of the fashion I revere and I am still overwhelmed by the price tags, but something has shifted in me.

While I still struggle with ambivalent feelings, I have come to terms with the fact that I am deeply and unapologetically moved by fashion. I find it to be creative and innovative. I love the power, confidence and individuality it offers women. I am enamored with the color, shape, texture, fluidity and form of fashion. And, I am happy that the fashion world has begun to embrace women of different shapes and sizes (There is still a very long way to go, but this fashion season, I have seen more curvy women and racial diversity than ever).

This series celebrates fashion and power. The women on my canvas’ are striding with confidence, style and strength. They are influenced by the fashion seen on the pages of magazines, on the red carpet and fashion runway, but have made it uniquely their own. I am asserting authority, individuality and fearlessness. On these canvas’ I am putting into play my own fantasy of becoming a fashion designer by dressing these women in found papers with distinct pattern, texture and print.

Dresses are built from torn, layered billboard papers that I’ve torn down and repurposed as fashion.  I love the use of these rich, textured paper that have layers of history and are then transformed into modern style.

"Collage for the Soul",Rockport Books, 2003, Harrison, Holly and Paula, Grasdal