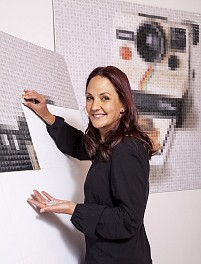 Pamela Stretton’s work explores a dynamic play between two elements, involving not only the visual binary of scale, but also the merging of digital photographic print mediums with handcrafted re-working. The visually appealing surface texture gives dimension to a work that is layered with meaning, as well as creative method. The result is a print with a difference.

Stretton hails from a print-making background. She obtained a masters degree in Fine Art from the University of Cape Town in 2005, which she received with distinction. Her subject matter originated as a self-study focusing on feminine beauty ideals inspired by a past battle with anorexia.

Earlier works bring to light elements of scale, scrutiny, conformity and control. Her work has evolved gently in a few directions exploring, among other things, notions of consumerism, women’s roles in society, narcissism and plays on social media. From soft feminine nudes, simple clean objects to larger-than-life portraits, her imagery is quiet and contemplative yet bold and powerful at the same time.

Stretton currently lives and works in Cape Town. She is represented by galleries and art consultancies in America, the UK and Europe, and her work appears in corporate and private collections worldwide.

Step into the studio with Pamela Stretton for a behind the scenes look at her unique process:

My artwork was borne out of an autobiographical study dealing predominantly with the female body. My original focuses included issues such as beauty ideals and the body’s relationship with popular culture, fashion, health and food, as well as the way women are perceived in society. Over time my work has evolved and branched into various avenues, yet the overall effect and feel of the work has remained consistent. I feel this is maintained due to the strong themes that run true and are suggested through the effects of my medium and process.

Inspired by print, most of my works take the form of digital inkjet prints, usually combining photographic images, text and iconography. The methods used to create the finished work involve re-working the print pixel by pixel by adding soft padding. This results in a visually appealing surface texture giving organic dimension to a flat print.

These detailed and ordered methods were intended as a comment on the notion of obsessive control very often exerted on the female body, while the padding made obvious reference to feminine softness. In contrast to this, the use of square formats, grids and pixels highlighted the notion of conformity, scale, scrutiny and fragmentation. In short, the whole image viewed in relation to the content of each tiny pixel sheds light on the many binaries present in each work  and serves to maintain an element of dynamic tension.

While my earlier work remains largely figurative often aided by the presence of recognizable brands associated with the world of fashion, beauty, food and consumerism, subsequent branches of exploration include a series of simple yet almost symbolic objects. While evoking subtle culinary notions they still hint at feminine body concerns and sometimes reference quirky iconography from the world of online commerce and advertising. Self-portraiture has also been a strong element of my self-study, and has evolved and developed into an on-going series. Most recently this line of my work has shed light on the realm of narcissism and social media. I am currently working on a series called The Colour Space, which focuses on a re-introduction of colour to my work. Aside from shedding light on the digital element of my medium, this body of work makes reference to contemporary photography and editing, the world of interior design, as well as the psychology of colour and its effects on human emotion.

Focusing on the female body, my work is to a large extent autobiographical. Issues such as beauty ideals and the body’s relationship with popular culture, fashion, health and food are central to my themes. A semiotic approach is applied to my portrayal of the body with the idea of the body being able to produce meaning and relay messages in its own right.  In my work, a system of signs is dealt with in terms of the encoded aspect. In a similar way that a real live body emits signs in the form of communicative acts, which are then interpreted by perceivers, the body in the two dimensional form of images, becomes encoded with information in the form of text, icons and numbers, which is intended to be perceived in the same way; as messages to be decoded in the ornate system of signs involved with the female body and issues such as anorexia. The encoding is literally ‘written on the body’, and actually makes up the surface tonality of the body image, likening the body to a text that should be read.

The works take the form of pixilated digital inkjet prints, which are adhered to a layer of soft foam, and then built-up, pixel by pixel onto a firm surface. Each 20 x 20mm pixel contains a piece of information in the form of iconography drawn from the food, fashion, consumerism and health and fitness industries, encoding the entire image in a specific context. The finished works depict a slightly reflective, rippled and soft surface. An intimate and close-up take of different parts of the body are usually seen from the author’s perspective, rendering the camera an extension of the artist’s own eye. As a result of this, the works often take on odd compositions and slightly distorted and abstract elements. The colour of the work has been reduced to subtle flesh tones rather than full colour, as a means to enhance the private and intimate nature of the works.

The pixel plays an important role in the work, pointing to a number of elements that should be noted. The first of which is the idea of scale. Enlarging a specific area for the purpose of immense scrutiny is crucial to the work and since the images are large and pixilated, the viewer is forced to stand at a distance in order to make them visually resolve. While the image resolves at a distance, the information contained within each individual pixel cannot be seen and requires the viewer to come forward to within a few centimeters of the work. Tension is created here through this constant pull between intimacy and distance. Repetition in the work also points to the use of the pixel. The colours of the pixels making up a digital image are often repeated, or vary slightly from one to the next, and in keeping with this notion, the information contained within the pixels in these works operates similarly. It becomes apparent that the contents of these pixels are variations of the same thing, if not repeated exactly. This repetition points to the notion of excess. Control is also an important element to the work (in relation to the body) and is enhanced by the presence of the pixel. Looking closely at a section of a pixilated image brings to mind the idea of a grid. Since the work involves a very neat, ordered and controlled method of arrangement, the use of grids is necessary throughout the process. The main purpose of these grids is to contain something or to keep something in place. These grids, in the context of the work and made evident through their pixilated nature, may be seen as a metaphor for control and conformity. Not only is the pixel a perfect square, an essentially geometric form, making up a curved, organic body, but also the format of the works themselves is a square inside which the body is contained. Almost all negative space is eliminated to highlight this notion of containment. This idea of the tightly controlled containment of the square and the grid is an important element of the work in terms of the obsessive behavior women often exert on their bodies in the name of beauty. Fragmentation is looked at in the work in terms of the realist fragment. The body is seen up-close and in part, referring to it in relation to specific parts. The fragment is made all the more prevalent in the work through the presence of the pixel. The works themselves depict fragments, making up a body of work, but the pixels too, can be seen as fragments of a whole, since a pixel is the element of which a digital image is made up. An important concept to note here is that it is not only the relationship between one pixel and another that serves to resolve the image, but also the relationship between each work and the others, in reading the body of work as a whole.